You are here: Home / Criminal Law / Negligent homicide by selling guns in Darknet

In June 2016, an assassination was carried out in a shopping centre near Munich’s Olympic Park. The perpetrator David S. shot a total of nine people before he killed himself. In January 2019, the Bundesgerichtshof (Federal Supreme Court) ruled that the seller of the weapon used by David S. in his amok run was liable to prosecution for negligent killing. He was sentenced to seven years in prison. 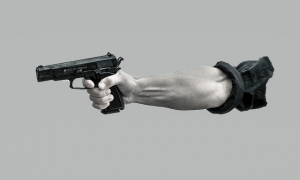 1. Both defenders and joint plaintiffs on appeal

While the joint plaintiffs, i.e. the relatives of the victims, had demanded in the appeal proceedings before the Federal Supreme Court that the arms seller should be sentenced for accessory to murder, the latter himself had pleaded for acquittal. Both sides were unsuccessful. On the contrary, the highest German court confirmed that the accused was to be sentenced “only” for negligent killing – albeit with a very high sentence of seven years. The court assumed that the amok runner, David S., did not involve anyone in the planning of his crime – not even the arms seller. In view of the fact that the weapon was sold in the Darknet under very dubious circumstances, the now convicted merchant could have recognized and should have recognized that at least the concrete danger exists that the weapon is used to commit a homicide.

2. When are everyday acts punishable?

The case raises the fundamental legal question under which circumstances so-called everyday actions can be made the subject of a criminal charge.

This question also arose a few years ago in a similar case, when the father of a juvenile amok runner had been accused in Winnenden of not properly storing the weapon that the son had later used as a weapon in a gun cabinet. At that time, it was also a question of whether the father, who had a legal gun possession permit, was aware of the mental illness.

3. A correct but harsh verdict

According to lawyer Dr. Tobias Rudolph, an expert in criminal defence law, the recent decision on the punishability of the arms seller is understandable – even if with a prison sentence of seven years very hard. Because to sell a firearm anonymously in the Darknet is just no everyday process, which could be also “harmless” for itself taken straight.

Loveparade procedure to be discontinued against money order
Scroll to top