You are here: Home / Criminal Law / E-Scooter – Caution when driving after drinking alcohol

E-scooters are becoming more and more popular as means of transport in the cities. At the same time you can read almost daily about trouble with E-Scooters. Many users of e-scooters underestimate the consequences of driving under the influence of alcohol. 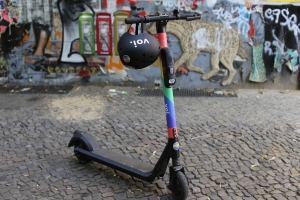 For drivers of electric scooters, the same alcohol limits apply as for drivers of cars or motorcycles. If the 0.5 per mille limit is exceeded, there is already an administrative offence according to § 24a StVG.

Young drivers of an electric scooter in particular must ensure that the 0.0 per mille limit applies during the trial period and generally under the age of 21. According to § 24c StVG, anyone who drinks an alcoholic drink or starts the journey as a driver of a motor vehicle in road traffic before the age of 21, although he is under the effect of such a drink, is acting contrary to regulations.

If the limit of 1.1 per mille is exceeded, an offence according to § 316 StGB, drunkenness in traffic, is committed. According to this, it is a criminal offence to drive a vehicle – including an e-scooter – even though, as a result of drinking alcoholic beverages or other noisy substances, the driver is not in a position to drive the vehicle safely. Within the framework of § 316 StGB, a distinction is made between relative and absolute unfitness to drive. Above a blood alcohol concentration of 1.1 per mille the driver is considered to be absolutely unfit to drive, i.e. above this value the unfitness to drive is irrefutably presumed. If the blood alcohol concentration exceeds 0.3 per mille, the so-called relative incapacity to drive may be present. Alcohol-related failure symptoms, such as driving in serpentines, must be added to this. Such alcohol-related failure symptoms must have been detected by the police.

What are the legal consequences of driving under the influence of alcohol?

If proceedings are instituted against the driver of an electric scooter for an administrative offence in accordance with § 24a StVG, the first offence is regularly punished with a fine of around 500, 00 euros, two points in Flensburg and a driving ban of one month.

In preliminary proceedings because of a criminal offence after § 316 StGB, drunkenness in traffic, fines or imprisonment up to one year threaten. A first offender is regularly liable to a fine based on his or her personal income situation. If the suspicion of a criminal offence according to § 316 StGB exists, the police usually seizes the offender’s driving licence as part of the control and the drivers are not allowed to drive any more vehicles for the time being.

If a conviction for drunk driving is handed down, the driver’s licence may be revoked in addition to the penalty itself. In contrast to a mere driving ban, the driving licence is completely revoked, i.e. you do not automatically get your “drivers licence” back after a certain time has elapsed. Only after expiration of a certain blocking period (at least 6 months) will the driving licence be reissued by the responsible driving licence office. It is advisable to submit the application for re-granting at least four months before the end of the blocking period, as the processing time is sometimes very long. Especially in the case of repeat offenders, a successful medical-psychological examination (MPU) is usually also required.

No statement should be made to the police officers. Especially not about what, how much and when you drank alcohol before starting the journey. As an accused or affected person, you have the right to remain silent. Relieving statements can still be made without disadvantages at a later time in the proceedings. Especially when you have drunk something, the “cool head” for prudent statements is missing.

We recommend that you consult a defence lawyer as soon as possible after an alcohol-related traffic check. As a defender, we have access to the procedural file and can advise you accordingly. The sooner you hire a defender, the sooner a suitable defence strategy can be developed and the consequences of an alcohol drive softened.