You are here: Home / Tax Law Self disclosure to avoid penalty

The present text already takes into account the amendments to the law on the conditions for filing a voluntary declaration exempting from punishment as of 1 January 2015, which followed the amendment to the law on the right of voluntary declaration in 2011. However, the tax agreement negotiated between Germany and Switzerland in 2011 and 2012 did not enter into force. 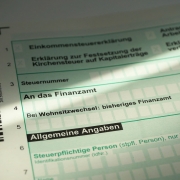 Pursuant to § 371 AO, it is possible to avoid punishment despite tax evasion which has already been completed by filing a voluntary declaration exempting from punishment. Anyone who voluntarily informs the tax authorities that taxes have not been paid in full is exempt from punishment. This possibility exists irrespective of the amount and duration of the tax evasion committed.

A condition for the effective self-reporting is that the taxes are paid completely within certain periods, and that the act was not yet discovered at the time of the self-reporting.

The periods, which are set by the tax offices for the additional payment of the arrears tax debts, are usually quite scarcely measured. A self-disclosure makes thus only sense, if sufficiently funds are present. In addition one should consider the evasion interest, which falls with 6% annually with longer periods quite in the weight.

The self-disclosure must be so concrete, so that it is effective, that the tax office can determine the tax without longer own determinations immediately. The amounts mentioned should be estimated rather too highly. If necessary the tax answers can be corrected still in the context of an objection procedure afterwards downward.

In practice one encounters again and again half-hearted or incorrect self-reports, which are then only the release for more extensive tax penal procedures. A self-report should therefore be well-considered and complete. By the iurisdiction and legislation the requirements to an effective self-disclosure were constantly intensified in the last years.

One reason not to make a voluntary declaration hastily – despite all the haste required – can be disciplinary or professional consequences which threaten, for example, civil servants, lawyers, tax consultants or doctors.

It should be borne in mind that self-reporting always only eliminates criminal liability for tax evasion as such (§ 370 AO). Other offences that are frequently associated with tax evasion (corruption, BaFöG fraud, forgery of documents, money laundering, Embezzlement and abuse of trust) are not covered by the exempting effect of self-reporting under § 371 AO.

If an heir finds out after the death of the testator of black money accounts of the deceased, then he is usually obligated to indicate the interest incomes resulting from it to the tax office (§ 153 AO). This communication has then no character of a self-disclosure, since the heir did not make itself not punishable – presupposed, he did not cooperate in the tax evasion of the testator. If it omits an inheritance however obligation-adversely to communicate the interest incomes from black money within certain periods to the tax office, then lies in it a new – own – tax evasion by omission. Also here a self-disclosure can be meaningful.

Before delivery of a self-disclosure should be caught up because of the various dangers always first qualified fiscal-legal advice by a attorney specialized in criminal tax law, before one discusses the circumstances with the own tax counsel. If it turns out that important reasons speak against the delivery of a self-disclosure, then the tax counsel should not be loaded with the knowledge around the criminal law background.