One person’s word against another’s

You are here: Home / One person’s word against another’s

„One person’s word against another’s“ – Is that enough for a conviction?

The starting position of a “One person’s word against another’s” constellation is typically a “one to one” confrontation between mutually contradictory claims to the accused act. A witness confirms the accusation by his statement, the accused denies the truth of the statement or presents an alternative description of the facts.

This must be distinguished from cases in which further incriminating evidence exists in addition to these diametrically opposed allegations. Particularly in sexual criminal law – but also in other offences in which, apart from the accused and the presumed victim, there are often no other suitable (eye- or ear-) witnesses (e.g. insult, physical injury, coercion, etc.) – the decision in whose favour the contradictory statements are to be evaluated is not an easy matter.

Although in case of unclear facts the court decides usually in case of doubt for the accused (in dubio pro reo), it is by no means the case that every “One person’s word against another’s” constellation automatically leads to an acquittal. Although a “stalemate situation” exists at first glance, the case-law withdraws to a “overall view” that is difficult to see through and scientifically contestable. 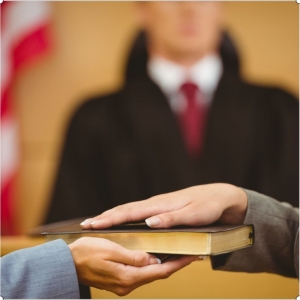 1. The guidelines of jurisdiction

For example, it must be included in the assessment whether a described fact can reasonably have occurred at all in this way. In addition, the statements in question are examined for their consistency and conclusiveness, whether they are freely presented or only fragmentarily recalled, constantly repeated or variably adapted to demand. In addition, the Federal Court of Justice (BGH) substantiated this in its judgment of 10.10.2012 (5 StR 316/12):

“If one person’s word stands against another’s, the court of fact must subject the testimony of the sole prosecution witness to a special credibility test. This applies in particular if the sole witness for the prosecution in the main hearing no longer maintains his accusations in whole or in part or if the initial description of further acts is not followed. It must be taken into account that in this constellation the accused has only limited possibilities of defence.”

From this it can be concluded that the decision rule in dubio pro reo is not automatically applied in favour of the accused, but that a particularly intensive evaluation of the incriminating statements must first be carried out. Only if doubts remain after this assessment of the evidence it can be assumed in the defendant’s favour that the incriminating statement is not sufficient for the court to be convinced of his guilt.

A critical point here is that this rather intuitive-looking assessment at no time allows a certain and reliable statement to be made about the outcome of the proceedings. Admittedly, § 261 StPO is formulated openly (“The court shall decide on the result of the evidence taken according to its free conviction gained from the hearing as a whole.“), from which the familiar expression also derives from the “assessment of evidence as the very own task of the trial judge”.

According to the consolidated view of the Federal Court of Justice, conviction in the sense of § 261 StPO is, however, already present when “a sufficient degree of certainty, based on life experience, is no longer given, in contrast to which reasonable doubts based not merely on theoretical possibilities do not arise“. Due to this cryptic and at the same time trivial openness of the definition, “free conviction” is the greatest gateway for wrong decisions, especially in the case of delicate and sensitive credibility and credibility assessments.

The assessment of the credibility of witnesses and the credibility of their statements are areas in which lawyers should be familiar. In reality, however, only very few do this. Far too often, well-founded expertise is inadequately replaced by alleged “knowledge of human nature”. Just how dangerous and counterproductive such half-knowledge can be is shown by a look at the numerous socio-psychological distortion factors that criminal proceedings regularly entail. Therefore, it is not uncommon for those involved in proceedings to have the impression after the judgment has been pronounced that they have attended various main hearings. It is no different here than in a marriage, in which the partners often have very different memories of one and the same event.

The criminal defence lawyer must put the subject of testimony psychology on the agenda himself. A professional defence counsel is psychologically trained and sufficiently networked in the world of specialists. The expert is able to draw up a credibility expertise. Only in this way can the necessary expertise be generated which offers the client the best possible defence.

Since, according to applicable procedural law, the judge may still refuse an application to obtain an expert’s opinion in order to verify a statement on the grounds that he himself is competent enough to assess the evidence, this is a neuralgic point of every “one person’s word against another’s” constellation.

The mistrust in a “lie detector test” is of no further use, which is less due to its suitability in principle than to the continued unsuitability of this method of investigation alleged by the courts.

Consequently, it is the “very own task” of the defence counsel to stir up justified doubts about the credibility of the statement incriminating the accused. This convincing and influencing of the court is daily bread of the defender’s activity and distinguishes a good criminal defender.