Does my spouse have to tell the truth as a witness in court?

You are here: Home / Does my spouse have to tell the truth as a witness in court?

Does my spouse have to tell the truth as a witness in court?

Whoever appears as a witness in court and testifies in this capacity must always speak the truth. Witnesses are always instructed before their questioning by the court that they are threatened with severe penalties if they make false statements. A false unsworn statement according to § 153 StGB or perjury according to § 154 StGB can even result in prison sentences of several years. 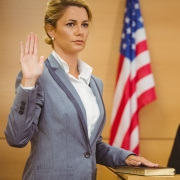 Only the accused may deliberately say the untruth, because he does not have to incriminate himself. Therefore he may lie as only process participant. A lawyer however – also a criminal defender – may not lie contrary to some prejudice – before court.

Family members may find themselves in a particular predicament as a result of the duty to tell the truth. Because marriage and family are protected by the Basic Constitutional Law, fiancées, spouses and other relatives have a right to refuse to testify; they can refuse to testify on the basis of the relationship between them. This right is enshrined in § 52 StPO. It should be noted, however, that this is only a right, not a prohibition. Relatives may certainly testify as witnesses, even if they would incriminate the accused. But if they testify, they must tell the truth.

By the way: the right to refuse to testify applies at any point in the proceedings, not at the trial itself. The right can even be exercised afterwards, i.e. after the testimony, so that under certain circumstances earlier testimonies may no longer be used at all.

Experience in criminal defence has shown that in the vast majority of cases it is advisable for relatives to make use of their right to remain silent. The few exceptions to this rule should be carefully considered and weighed.